1 loaf of day old crusty bread2 cups of milk3 large eggs1 tablespoon of sugar1/2 teaspoon of cinnamonMargarine for cookingSugar and cinnamon for topping
This site uses US measurements.

Portuguese scrambled eggs is an easy and inexpensive meal that is also flavorful.
Portuguese Omelette Recipe 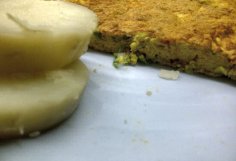 I remember loving this as a child, and my children enjoy this cereal.
Top